Each ton of carbon dioxide emitted into the atmosphere today causes about $40 worth of damages. So at least says standard economic thinking.

A lot goes into calculating that number. You might call it the mother of all benefit-cost analyses. It’s bean-counting on a global scale, extending out decades and centuries. And it’s a process that requires assumptions every step along the way.

The resulting $40 figure should be taken for what it is: the central case presented by the U.S. Government Interagency Working Group on Social Cost of Carbon when using its preferred 3% discount rate for all future climate damages. But it is by no means the full story.

And the discount rate is not the only assumption that makes this kind of a difference. In Climate Shock, we present the latest thinking on why and how we should worry about the right price for each ton of carbon dioxide, and other greenhouse gases, emitted into the atmosphere. There are so many uncertainties at every step—from economic projections to emissions, from emissions to concentrations, from concentrations to temperatures, and back to economics in form of climate damages—that pointing to one single, final number is false precision, misleading, or worse.

Of course, that does not mean that we shouldn’t attempt to make this calculation in the first place. The alternative to calculating the cost of carbon is to use a big fat zero in government benefit-cost calculations. That’s clearly wrong.

It’s not over ’til the fat tail zings

In fact, we are pretty sure it can be cut off at 1°C or above. Global average temperatures have already warmed by over 0.8°C, and we haven’t even doubled carbon concentrations from preindustrial levels. Moreover, the temperature increases in this calculation should happen ‘eventually’—over decades and centuries. Not now.

What’s even more worrying is the upper tail of that temperature distribution. There’s no similarly definitive cut-off for the worst-case scenario. In fact, our own calculations (based on an International Energy Agency (IEA) scenario that greenhouse gas concentrations will end up around 700 parts per million) suggest a greater-than-10% chance of eventual global average warming of 6°C or above.

Focus on the bottom row in this table. If you do, you are already ahead of others, most of whom focus on averages, here depicted as “median Δ°C” (eventual changes in global average surface temperatures). The median is what we would expect to exceed half the time, given particular greenhouse gas concentrations in the atmosphere. And it’s bad enough.

But what really puts the “shock” into Climate Shock is the rapid increase in probabilities of eventual temperatures exceeding 6°C, the bottom row. While average temperatures go up steadily with rising concentrations, the chance of true extremes rises rapidly: 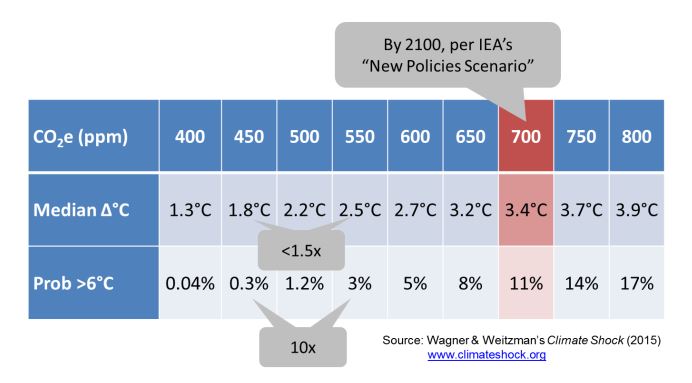 Global average warming of 3°C wouldn’t be unprecedented for the planet as a whole, in all of it geological history. For human society, it would be. And that’s where we are heading at the moment—on average, already assuming some ‘new policies’ to come into play that aren’t currently on the books.

It’s the high-probability averages rather than low-probability extremes that drive the original $40 figure. Our table links greenhouse gas concentrations to worryingly high probability estimates for temperatures eventually exceeding 6°C, an outcome that clearly would be catastrophic for human society as we know it.

Instead of focusing on averages then, climate ought to be seen as a risk management problem. Some greenhouse gas concentration thresholds should simply not be crossed. The risks are too high.

This kind of focus on temperature extremes is far from accepted wisdom. We argue it ought to be.

Gernot Wagner and Martin L. Weitzman are co-authors of Climate Shock (Princeton University Press, 2015). This post was first published by The Institute for New Economic Thinking.

← The Future of Fires

How Much Higher? The Growing Consensus on the Federal SCC Estimate →